Where It All Began

For those of you that are curious, this is how the County Seats project came to be. I blame a Nashville thrift store and National Geographic. Everything kinda snowballed after that. 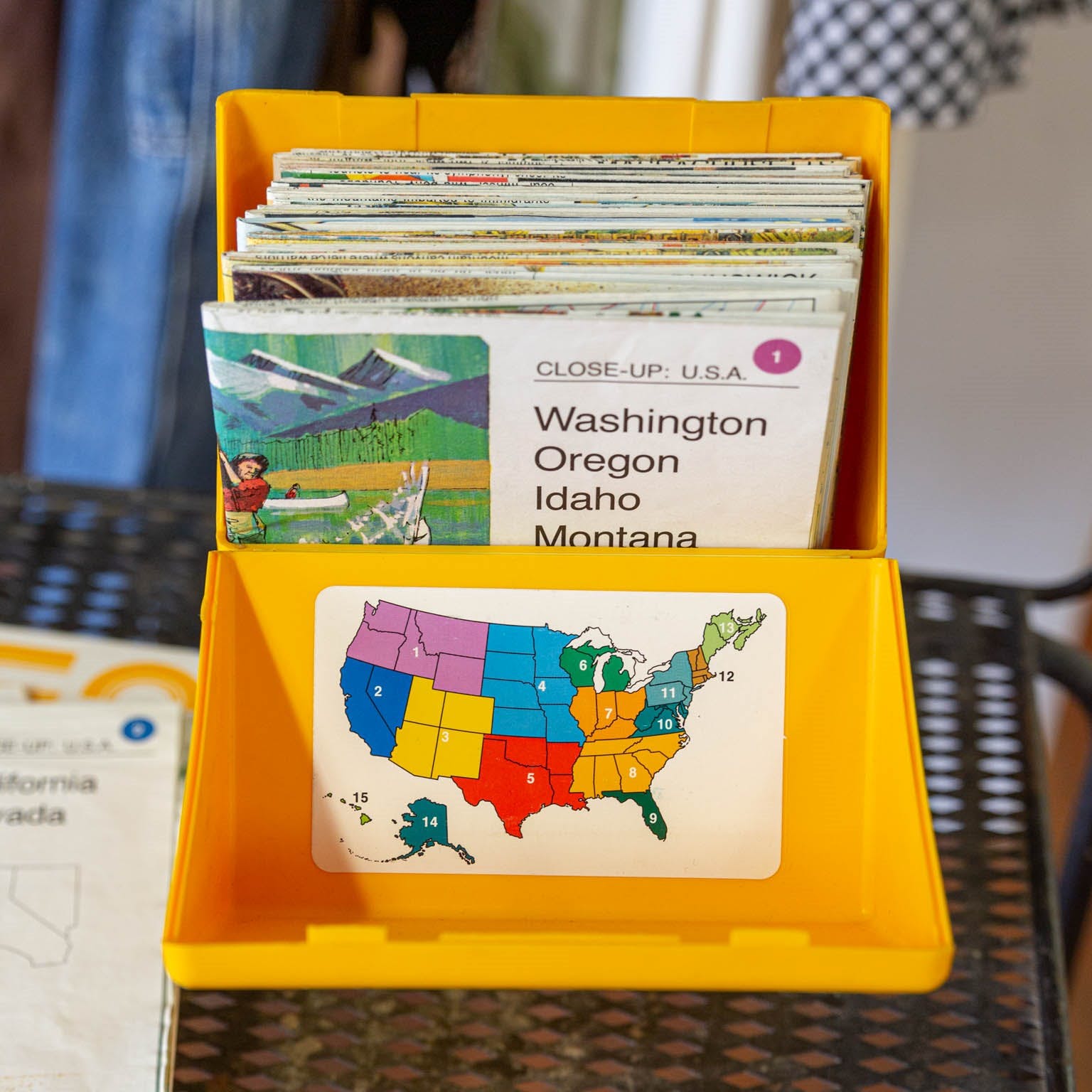 In my early 20s, I frequented thrift stores for vintage and mid-century modern items. I've always had an eye for design and at the time was working as a web designer for an advertising agency. Anything using tightly-kerned Helvetica can make me pull out a credit card and swipe!

One of my scores this era (RIP Pre-to-Post Modern) was a great collection of maps in a yellow plastic container with a lid. I fell in love with the collection of items and promptly paid the $10.

Once home, I looked briefly at the maps and realized that National Geographic had been the publisher. Packing the maps away for safe-keeping, I used this box as my storage for any loose items around my home-office desk. Not only was it a great item (and Helvetica!) but it was a constant reminder of the USA in general, how big it is, and gave me a bit of an itch to explore new areas whenever I looked at it.

This little box ended up inspiring the color scheme of this website, but I'm getting ahead of myself.

There are people that exist that enjoy going to each county in a state. The act of visiting counties is called county collecting. There are groups for this kind of thing.

Ultimately, I got into it because I lived inside a 75 mile radius from birth, through college, and into professional life. I'm also a 6th generation Tennesseean, which gives me a stronger connection to place than most folks have. With a move out-of-state for work looming, I realized that I had never visited what was around me - there are 95 counties in Tennessee and I had only visited about 15. Why not?

My feelings have evolved and matured since 2012 when I started in earnest.

Introspecting, there are so many things I get out of visiting county seats... an understanding of how places came to be, an appreciation for both the history and trajectory of an area in terms of socioeconomic growth/decline, and an excuse to go to places that I otherwise would have no reason to see, ever.

These encounters, though usually brief, help me paint a much more nuanced picture of the country and have been tremendously helpful in helping me understand what life is like outside the 'city'.

A Common Way of Living

Let's zoom out a bit: The majority of America's land mass is open, wild, and lightly trod. Rural communities abound that have slowly come to be over time, and others were thriving and are now ghost towns. The attitudes, preferences, sensibilities, and vernacular of the different areas I've been to are definitely different, but they're the same in as much as they all share the same colloquial pride in who they are, what they stand for, and the traditions and personalities that have preceded the current residents of an area.

It fills my heart to converse with a general store clerk, diner chef, gas station attendant, or fellow patron of an establishment I happen to walk into. The inherent goodness that you find in these areas really makes you think twice about the benefits of living in a metropolitan area.

I'm a father of two and I'm constantly thinking about things I have learned on the road, learned in preparation for my excursions, and learned in research after-the-fact, trying to figure out what a building used to be or why a land feature is the way it is.

Where We Are Now

The Close-Up U.S.A. box that I've had for a decade now is still in my home office. I'm working to pull together documentation from various sources (Evernote, Word Docs, Dropbox, Facebook, iCloud) before enough time passes that my experiences are lost to technology and time.

In the same spirit of starting a quest to see every county in America in order to push me to explore, I've also started exploring thoughts around how rural areas connect to more urban ones, how they're different and why that matters, as well as the role technology plays in all of this.

County Seats even inspired me to try podcasting. I'm not great at it, but I'm sure that I'll learn a ton about that along the way.

I also plan to use my travels as source material for creative endeavors: goods for sale (posters, shirts, stickers), writing songs, and Lord knows what else.

One question I get often from people is "Do you really think you're actually gonna get to every county?"

With a full time job and no sponsorship of any kind, I have no way of knowing. It's a noble goal, and who knows how close I'll get. As of Jan 1, 2020 I've already completed 4 states. My first goal is to visit at least one county in every state, which is very doable. I'm eager to see more and can't wait to make it to my next state. After that, I'm just enjoying the ride.